Written and Illustrated by Sand Sheff

One book that will last long after the eclipse.

Did you know that the Sun and the Moon appear the same size in the sky?  That's because the Sun is 400 times bigger than the Moon, but also 400 times farther away.  It's been called "the great coincidence", but is it really just coincidence?  Come take a journey to learn secrets of the Sun and Moon, and get a front-row seat as they line up to show us the amazing ECLIPSE MIRACLE!  INCLUDES 8 Page SCIENCE SECTION
Here's what folks are saying:

"A wonderful book by Sand Sheff, with great scientific and spiritual content for all ages and backgrounds (with the [very] occasional Bible verse being quoted alongside academic references). The message is powerful, the story is great, the science is 100% accurate, and the author has done a masterful job of mixing the scientific facts with the wonderment and special nature of total eclipses. The book is educational, enlightening, and uplifting in a way that is difficult to explain to someone who sees only the mathematics of the event. HIGHLY recommended!
Dan McGlaun Executive Director  Eclipse 2017 . org

​It has to be one of the most beautifully presented stories for children! It contains science for beginners, geography, God lessons and how to overcome fear...Everything!"
Dr.Katina Michael
editor-in-chief IEEE Technology and Society Magazine


What makes this book different:

Eclipse Miracle is colorful and not dated "2017". It's message and story is still relevant after the eclipse.

The Eclipse Miracle is scientifically accurate but does give God credit for creating the Sun, Moon and Earth. It does this in a non-denominational way that will inspire children of all faiths.

Previewing the Book:
On this page, you will find a low-resolution pdf of the interior and see the cover, see some author info etc... and be able to access a narrated video of the book.

For Wholesale and Hard Cover Books...For 10 books or more-

Thank you for contacting us! If needed, you will hear back within 48-72 hours.

About the Author: Sand Sheff is an entertainer, elementary school teacher and author from Moab, Utah. A veteran of both the Nashville and Austin music scenes, he has released more than a dozen recordings of original music as well as two books. This year he is  featured at many festivals including the upcoming National Cowboy Poetry Gathering in Elko, NV.

20 years ago, Sand was watching public access TV at a friend’s house in Nashville. A lecturer mentioned that the apparent sizes of the sun and moon are identical. At first, Sand didn’t believe it. Surely they would have taught us this fact in school!  But when he researched the information, he found out it was true: the sun and the moon are essentially the same size in the sky. The idea found its way into some of his songs, but it wasn’t until this past year that he decided he should describe this truth by means of a children’s book.  Though untrained as a visual artist, he needed to illustrate it himself. This last winter, he got up in the wee hours of the morning before he went to work to complete the artwork.  TLC Graphics in Austin designed the book this spring and it finally was published in early June, just a couple of months before the Great American Eclipse itself.

FAQ’s: Is the book scientifically accurate? Yes it is. All the facts presented are common scientific knowledge and can be verified with a click of Google. There is also an 8 page science section at the end of the book with lots of fun facts about the Solar System.

Why doesn’t everyone already know the sun is the same size as the moon in the sky? Good question. For some unknown reason, this most fundamentally amazing fact about the two great lights in our sky is often neglected or downplayed in most educational descriptions of eclipses. Of course, scientific explanations say that the moon goes in front of the sun, but then typically neglect to mention that the two orbs line up perfectly due to an astonishing alignment in distance to diameter ratios. Scientists typically say it is coincidence. Whatever you may call it, the moon covers the sun perfectly during a total eclipse and will do so again on August 21st, as millions will witness.

How can I get books wholesale? Books are available wholesale for distributors through Ingram or here at the website. Anybody can buy retail through the website as well or purchase it at local bookstores and visitor centers (the best way to do it!) or major online retailers . There is also a narrated video of the book above.

Sand hopes you spread the word; the sun's the same size as the moon in the sky! 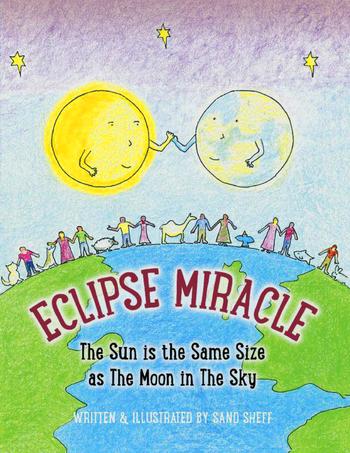 Below is a link to the story on You Tube